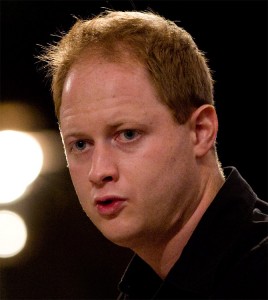 Samuel Burstin is gaining international recognition as both violist and conductor. A member of the Philharmonia Orchestra since 2005, he has played principal viola with eight major orchestras in England, Scotland, Wales and New Zealand. In June 2014 he was a prizewinner at the prestigious Evgeny Svetlanov International Conducting Competition in Paris; he conducted the Orchestre Philharmonique de Radio France at the Salle Pleyel and was described by a jury member as “unfailingly musical”.
Samuel made his conducting début in 2006 with the St Paul’s Sinfonia, and his professional début three years later with the West London Sinfonia in a concert including Shostakovich’s “Symphony No. 5”.
He is the founder and conductor of the Paradisal Players, an ensemble of brilliant musicians who play heavenly music for wonderful causes; since 2011 they have given around three concerts a year, raising over £100,000 for charities.
Samuel Burstin studied violin, piano, saxophone and singing as a child. After discovering the viola at sixteen, joined the National Youth Orchestra.
In 1999 he entered the Trinity Laban Conservatoire of Music and Danse, studying viola with Richard Crabtree and conducting with Peter Stark. He left five years later having won many awards and the prestigious Silver Medal for Strings, and with a First Class Honours Degree and a Postgraduate Diploma with Distinction. After a year with the Southbank Sinfonia he joined the Philharmonia in 2005 and appointed the first alto.