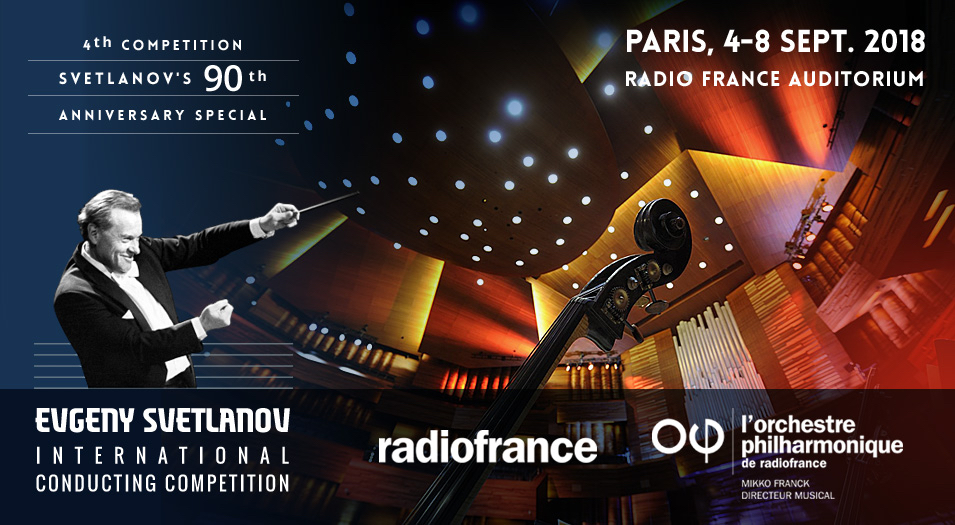 “Music is the highest artistic ideal, a reflection of Cosmic Harmony. It confronts man directly with the deepest Mysteries of life.”
SPIRITUAL CHARTER OF HUMANITY (1946)

The 4th Competition will be organized jointly by the “Evgeny Svetlanov International Conducting Competition” Association and Radio France.

RULES OF THE COMPETITION

The association, called the “Evgeny Svetlanov International Conducting Competition», a non-profit making organization (hereinafter the “Competition”), is comprised of a Board of Directors, an Executive Committee, an Honorary Members’ Committee, a Jury and a Secretariat.
The head office is at 47, boulevard de Courcelles 75008 Paris.

1. The Competition is open to musicians of all nationalities who have completed their training. Applications will be considered regardless of candidates’ political persuasion, ethnic origin, faith, gender, marital status or disability unrelated to the profession.

The complete application form (including the video recordings) must be sent to the Competition between 15th January 2018 and 30th March 2018 at the latest (date of postmark).

1. Candidates should send the completed official application form by post to the Competition Office at Radio France enclosing other documents and required material (mentioned below) to the following address:

The lists of musical works are presented in section 3 “Rounds”.

b) A photo taken within the last 6 months. The photo should be affixed to the application form.

c) Curriculum vitae
The CV should specify candidate’s previous experience and career as a musician: studies, names of professors, highlights of musical activities, competitions in which he/she has participated, prizes won, etc.

d) Video recordings: DVD recordings
Download the “Video Recordings” form to fill.
Only recordings subsequent to the 1st January 2015 will be accepted.
Please, send us at least one DVD recording of 30 min. of music with one or two works and no more then 2 DVD recordings of of 2 hours of music in total with 3-4 works.

e) A Photocopy of the candidate’s passport

2. The candidate must also send the application form and the same video recordings via ”We Transfer” or an Internet link (”Youtube” or other) to the following e-mail addresses:
concoursmusique@radiofrance.com and administration@svetlanov-evgeny.com

3. Candidates who submit false information or material will be disqualified.

4. Candidates’ documents, video recordings and other submitted material will not be returned.

SELECTION OF THE CANDIDATES

1.The Artistic Director will either accept or reject candidates for the First Qualifying Round after reviewing applications and video recordings.

2. The Artistic Director will select 18 candidates for the First Qualifying Round.

3. Results of the selection process will be sent to candidates by e-mail before 5th June 2018.

4. No reason for accepting or rejecting applications will be given.

1. Candidates admitted to First Qualifying Round after selection based on application forms and video recordings must pay an application fee in order to confirm their participation in the Competition.

2. The application fee is 400 €.
This fee is strictly non–refundable.
Fee payment should be made by transfer to the Competition’s bank account.

3. The application fee must be paid before 30th June 2018 to confirm participation in the Competition.

The rounds of the competition will be held at the Auditorium de Radio France (116, avenue du Président Kennedy, 75016 Paris, France).
The First and Second Rounds will be held in closed session, the Final Round will be open to the audience.

MUSICAL WORKS OF THE ROUNDS

Each candidate must specify on the application form musical works he wishes to conduct for each round.

1. First Qualifying Round: 20 minutes per candidate
Set of works (select one work from the list below):

2. Second Qualifying Round: 30 minutes per candidate
Set of works (select one work in each section below):

3. Final Round : 1 hour 20 minutes per candidate
The candidate must present a programme consisting of:

1.Two compulsory works:
a. EVGENY SVETLANOV: Daugava, symphonic poem
NB: The score will be sent by e-mail to selected candidates.

b. 6 minutes of CONTEMPORARY WORK “Svetlanov Planet” written by Olga Victorova (commissioned by the Competition and Radio France) to be prepared in 15 minutes.
NB: The score will be provided to the candidate 1h30 prior to the beginning of his/her performance.

2. One of the three works selected by the candidate for the Final Round in the application form. This work will be indicated to the candidate after the Second Qualifying Round.

The order of performance for each round will be determined by drawing lots.

1.The order of performance for the First Qualifying Round will be sent by e-mail before 15th July 2018.

1. The order of performance for the Second Qualifying Round will be announced after the announcement of the First Round results.

1. The order of performance for the Final Round will be announced after the announcement of the Second Round results.

1. The results of the First Qualifying Round will be announced at the Auditorium de Radio France following the Jury’s deliberation on Wednesday 5th September 2018 at 2:30 p.m.

2. The results of the Second Qualifying Round will be announced at the Auditorium de Radio France following the Jury’s deliberation on Friday 7th September 2018 at 5:30 p.m.

3. The results of the Final Round will be announced at the Auditorium de Radio France following the Jury’s deliberation on Saturday 8th September 2018 in the presence of the audience.
The audience will also award the Audience Prize.

The awards ceremony will be held at the Auditorium de Radio France after the announcement of the results of the Final Round of the Competition.

1. Winners will be awarded First, Second and Third Prizes and Honourable Mention will be awarded to the fourth finalist.
2. In case of a tie, the prize and cash award will be shared.
3. The Jury is not required to award all prizes.

SPECIAL PRIZE FROM THE ORCHESTRA

The Orchestre Philharmonique de Radio France will invite the prizewinner/s of the 2018 4th Evgeny Svetlanov International Conducting Competition to conduct a performance in the 2020-2021 season.

The audience will vote for the Audience Prize. The result will be announced at the Auditorium de Radio France after the counting of votes.

The music partners will offer future engagements to one or more prizewinners of their choice. Please visit “Our partners” page on the Competition website.

1. During the Competition, the Executive Committee will claim all rights for the communication material indicated below. Candidates may neither object nor claim any remuneration (this clause includes the press conference).

a. Sound and/or video recording, film shots and photos.
b. Radio, TV and Internet broadcast of the above items.
c. Copy and/or sale of above items.

The candidates will be required to cooperate in all film, photo sessions and/or interviews planned by the Competition.

2. Candidates will have to obtain prior authorisation from the Competition before the beginning of the First Qualifying Round for film and photo shots, or any interviews other than those planned by the Competition.

2. All the rounds of the Competition will be broadcast live on Radio France, medici.tv and the Competition’s website svetlanov-evgeny.com.
They will also be recorded for re-broadcasting purposes or for other audio-visual commercial or non commercial use.

4. Camera crews may videotape and/or photograph all Competition events.

1. The Board of Directors and the Executive Committee will not be liable for accidents indicated below occurring during the Competition:

a. Damage to or loss of candidates’ belongings.
b. Physical, material or moral injury caused or sustained by candidates.

2. All candidates are therefore advised to make their own appropriate insurance arrangements.

1. Decisions made by the Executive Committee regarding the administration of the Competition selection based on the application and video recordings and the Jury’s decision on evaluation are final and irrevocable.

2. Candidates may not appeal against the above decisions.

1. In order to ensure the smooth running of the competition, the Executive Committee may add, remove and/or change the Competition’s rules even after they have been published.

2. If problems arise regarding points not covered by the rules, the competitors will be required to follow the decisions and rulings made by the Executive Committee.

If an amicable solution cannot be found in the event of a dispute, the matter will come under the jurisdiction of the Paris courts.

1. The above rules are provided in French, English and Russian.
2. The French text is the only officially accepted version.