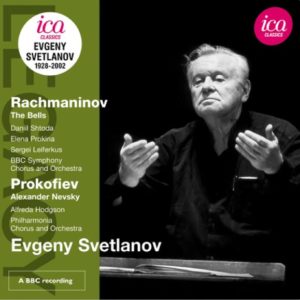 I was Mr Svetlanov’s manager for 12 years in the 1970s and ‘80s – but, as a 15-year-old schoolboy, I had actually heard him for the first time in 1961 when he conducted the London Philharmonic with Bella Davidovich as soloist…

And, even now, I remember very clearly how forcefully I was struck by his artistry and style all those long years ago…

As a specialist manager of conductors, I have never had (with the possible exception of the period when I worked with Sergiu Celibidache) the range and depth of musical experiences as those I enjoyed with him. His London concerts with the Philharmonia, the London Symphony, and the BBC Symphony were simply unforgettable. His conducting had a unique combination of poetry, drama, and elemental power. And he was always able to hold all these London orchestras in the palm of his hand, through his extraordinary control and technique. In rehearsal he spoke little – for it was his eyes and hands that conveyed everything he wanted to express in terms of the shape and characterisation of the music.

Sadly, he was not as well-known internationally during his lifetime as he should have been (I would rather have heard him any day than Von Karajan for instance – because there was a burning honesty and passion, transmitted straight ‘from the heart’ in all his performances). Because he generally did not want to compromise, or adapt, to ‘western’ practices or habits in any way, this sometimes gave rise to his reputation for being ‘difficult’ – and so I often faced the difficulty also of explaining to hall and orchestra managers that this stemmed only from an absolute professionalism, and above all a desire to give of his very best on all occasions.

We remained in good contact (and I went to as many concerts of his that I could) until the end of his life – and indeed I attended his last concert in London with the BBC Symphony – a very powerful and moving musical experience, particularly being aware, as we were, that he would never again return to the stage… The recording of this concert, subsequently issued on ICA Classics, faithfully captures this farewell.

So his wonderful musical personality, and interpretations over the last 60 years, have remained part of my most treasured memories.